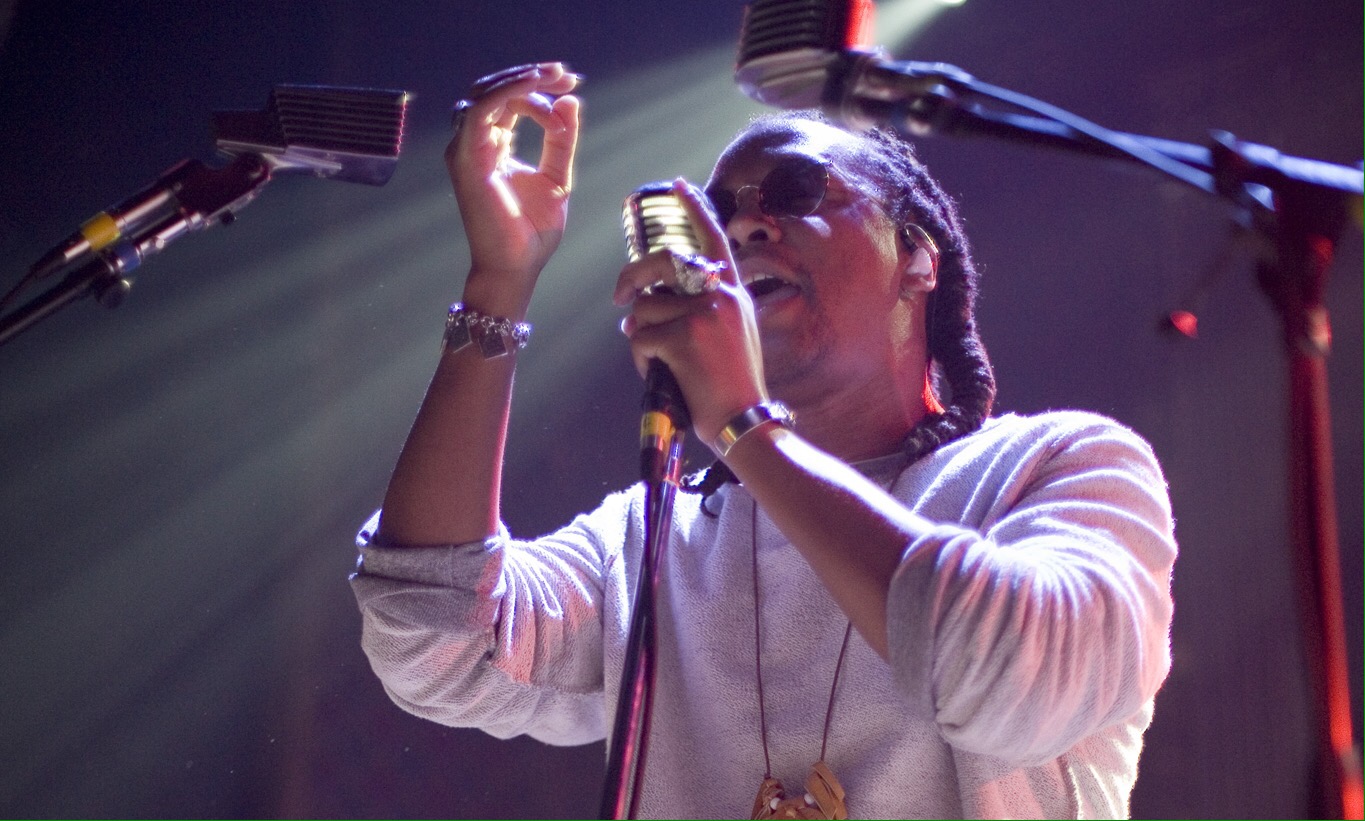 Lupe Fiasco took over The Ogden Theatre in Denver this past Sunday and it was nothing short of a championship performance, coinciding with the Broncos’ win over the New England Patriots for the AFC title that same night.  The city was already on fire after the win and the energy was palpable as soon as Lupe hit the stage, opening with the instrumental “Summer” off of his latest album offering, Tetsuo& Youth.  The melody reached the crowd as Lupe emerged before a fairly simple stage set, utilizing a triple microphone setup, as if he wanted you to hear every syllable he was about to spit.  He launched into “Mural” and unleashed a barrage of lyrics that were even more mesmerizing watching them delivered live.  “And a hundred words, for them hummingbirds, that like to eavesdrop / And fan out, like peacocks, with a parakeet, that beat box / So the sun rise, when the beat drops, and the sun dies, when the beat stops…”  He was definitely in command of the song’s intricate flow, rhyming almost nonstop for close to nine minutes as the crowd watched in a trance.

He continued the show with “Dots & Lines,” opting to follow the track order on Tetsuo & Youth, altering it a bit by skipping to stand out songs from the album.  Next up was “Body of Work” with its multi-layered story line and word play, “Flags of Tibet, to bet, to bed, to death, flesh.”  Seemingly simple on the surface, his lyrics deserve multiple listens in order to catch the double meanings and play on words.  Lupe’s lyrical prowess has been on a continual rise since his entrance into the music game.  His live performance this night also demonstrated his ability to maintain his breath control while flowing for minutes on end.  He continued the show by switching to one mic as the “Winter” instrumental played, signifying a change in mood and following the album concept which goes through the four seasons.  The ominous strings on “Winter” did something to the crowd, the music obviously playing a huge part in the ebb and flow of their energy.  Right before they were rocked into a stoned lull, the powerful “Deliver” was cued and the crowd chanted right along, “Pizza man don’t come here no more!”  Another powerful song with a concept to match, and if you haven’t seen the video, don’t sleep.

Rounding out the performance of Tetsuo & Youth was “Adoration of the Magi,” which brought the show into its second act.  The set was stripped down to one microphone as Lupe’s DJ threw on Kanye’s “Diamonds are Forever” instrumental and Lupe rapped his verse from “Conflict Diamonds.”  He then flew into “The Coolest” as I listened to several fans perfectly deliver Lupe’s verses right along with him in a rousing a cappella performance.  Really taking control of the crowd at this point, “Hip-Hop Saved My Life” came on and was met with thunderous applause as the crowd chanted, “stack that cheese!” while the instrumental changed to The Geto Boys’ “My Mind Playing Tricks On Me” for the second verse.  Lupe abruptly stopped the music with a simple cue to his DJ as a scuffle had broken out on the floor in front of him.  He quickly extinguished the tension by addressing the perpetrator directly, announcing, “I don’t do fights at my show.  If you’re going to turn up, turn up respectfully” to the crowd’s obvious delight.

The megaton force of energy continue with “Go Go Gadget Flow” as the people in attendance unleashed their inhibitions and forgot where they were, if only for a few seconds.  I spotted a middle aged man on the balcony wearing a Broncos cap and what can only be described as “dad jeans,” doing his best “turn up arms” and releasing a barrage of off tempo hand claps.  Dad was feeling it.  I don’t blame him.  By now, Lupe was riling up the crowd by referring to them as “winners and champions” as he said, “we haven’t been to a city where their football team is on the way to the Super Bowl!”  The enthralled Hip-Hop fiends lost whatever composure they had been holding on to.  Fiasco then physically parted the crowd down the middle into a left and right side, instructing one side to lose their shit when the beat dropped while the other side held still, all in the spirit of competition.  It definitely worked.  He rapped the first bars of “Next To It” before the bass kicked in and the people erupted in convulsions and began jumping in place.  The Ogden was lit.

Just when you thought things were wrapping up, Lupe killed his verse from Kanye’s “Touch the Sky” before transitioning into his offering for the females in attendance with “Out of My Head” and “Paris, Tokyo,” continuing the groove like a good indica settling in the system.  Lupe announced thereafter that he was now an independent artist and detailed his plans to drop three albums in 2016, the first titled, Drogas and the second one titled, Skulls.  The third album, Roy, is particularly special to him because he stated that this would be his last album, “but there’s always a catch,” he continued to say as his first single off of Drogas, titled “Tranquilo” and featuring Rick Ross and Big K.R.I.T., filled the theatre like a sonic boom.  Lupe then rounded the night off with a master’s deliverance of crowd favorites, “Kick Push,” “Superstar,” and “The Show Goes On.”

The show did go on as his entire performance lasted a total of two hours.  This was the opposite of what I’ve come to expect from a standard Hip-Hop concert.  The mark of a true M.C. is what I witnessed that night from Lupe Fiasco, whether your definition of M.C. is Master of Ceremonies or one who “Moves the Crowd.”  He did both and then some, commanding the attention of everyone in attendance through the classic staples of a true showman: crowd participation, relentless energy, breath control, and above all else, an obvious enjoyment for what he was doing in the moment.  The often times sloppy performances from Hip-Hop headliners have become all too common in this digital age, yet seeing one artist give the performance his all was truly refreshing and left the city of Denver reeling back home in an amazed stupor.  No hype-man.  No two hour delays.  No posturing, no posse, no pausing.  One DJ.  One M.C.  One truly unforgettable night in the Mile High. 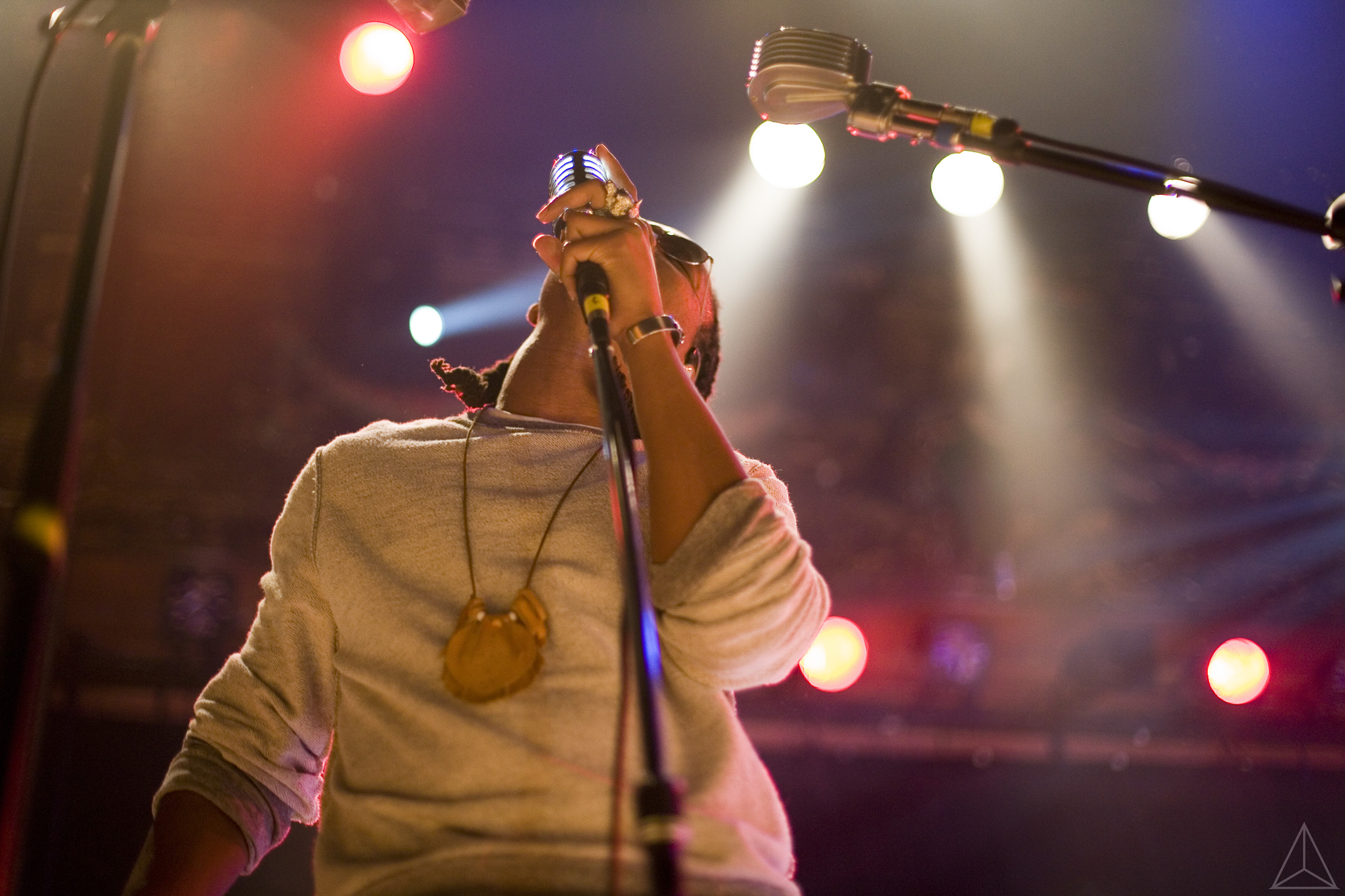 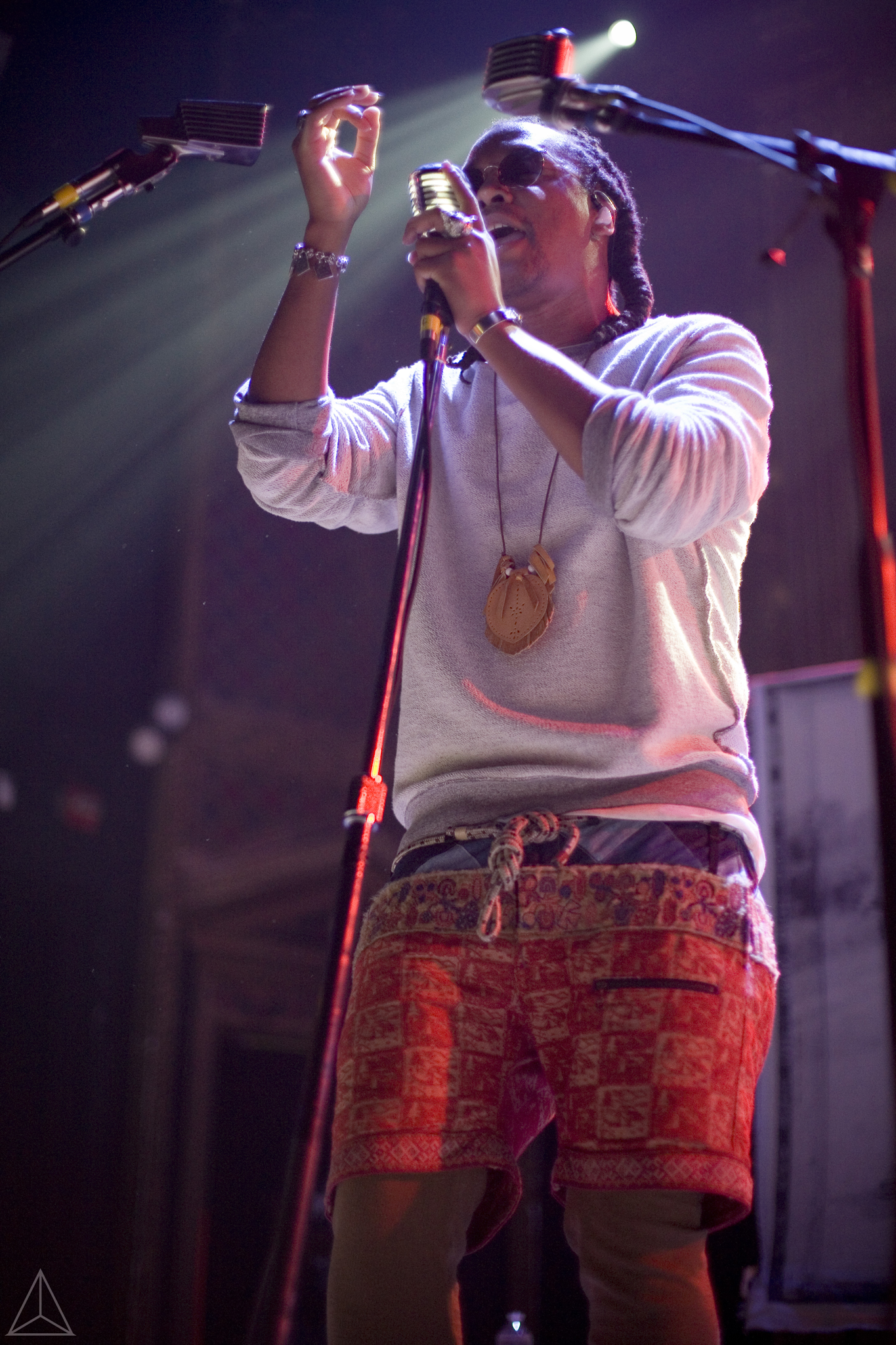 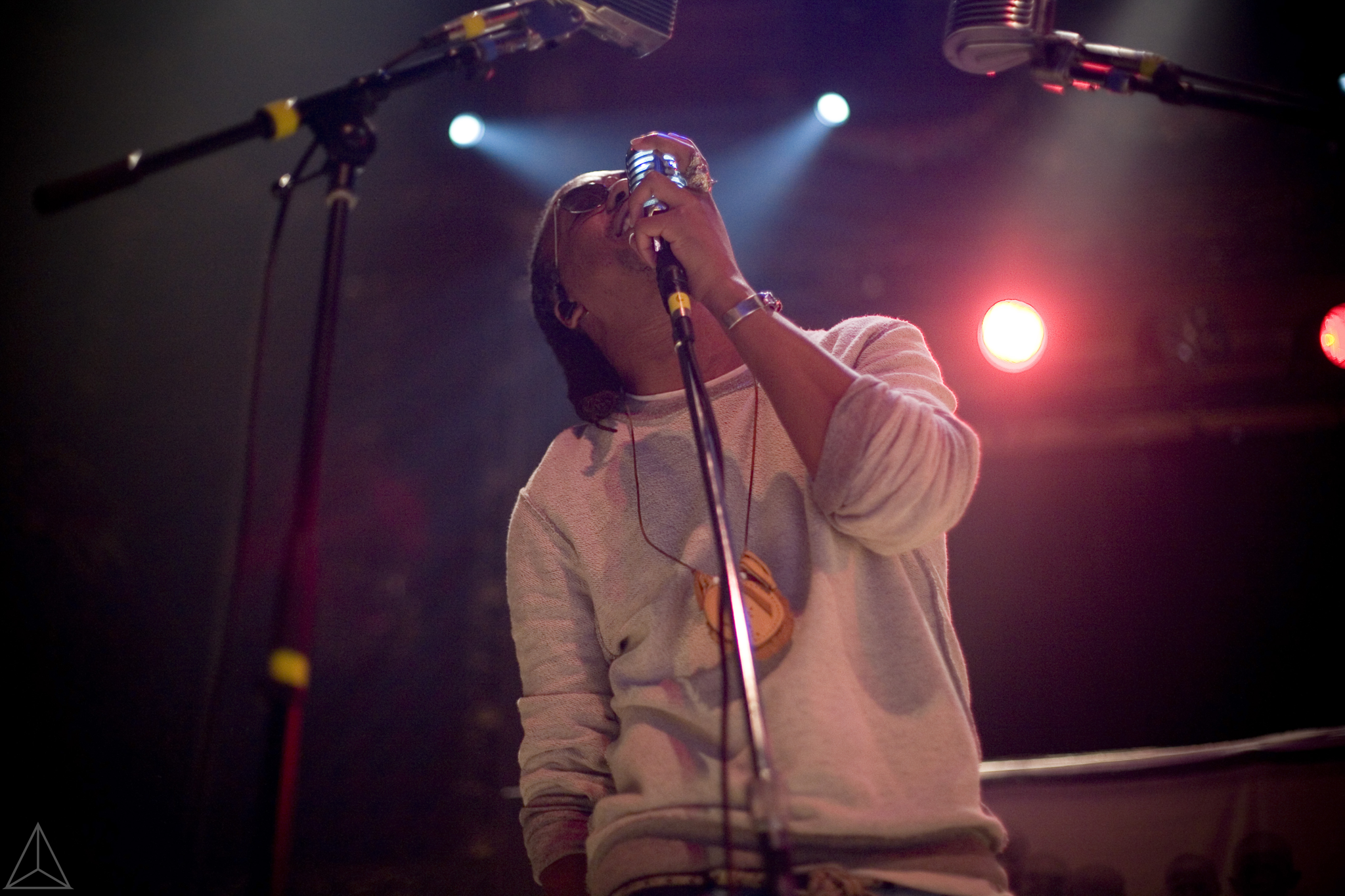 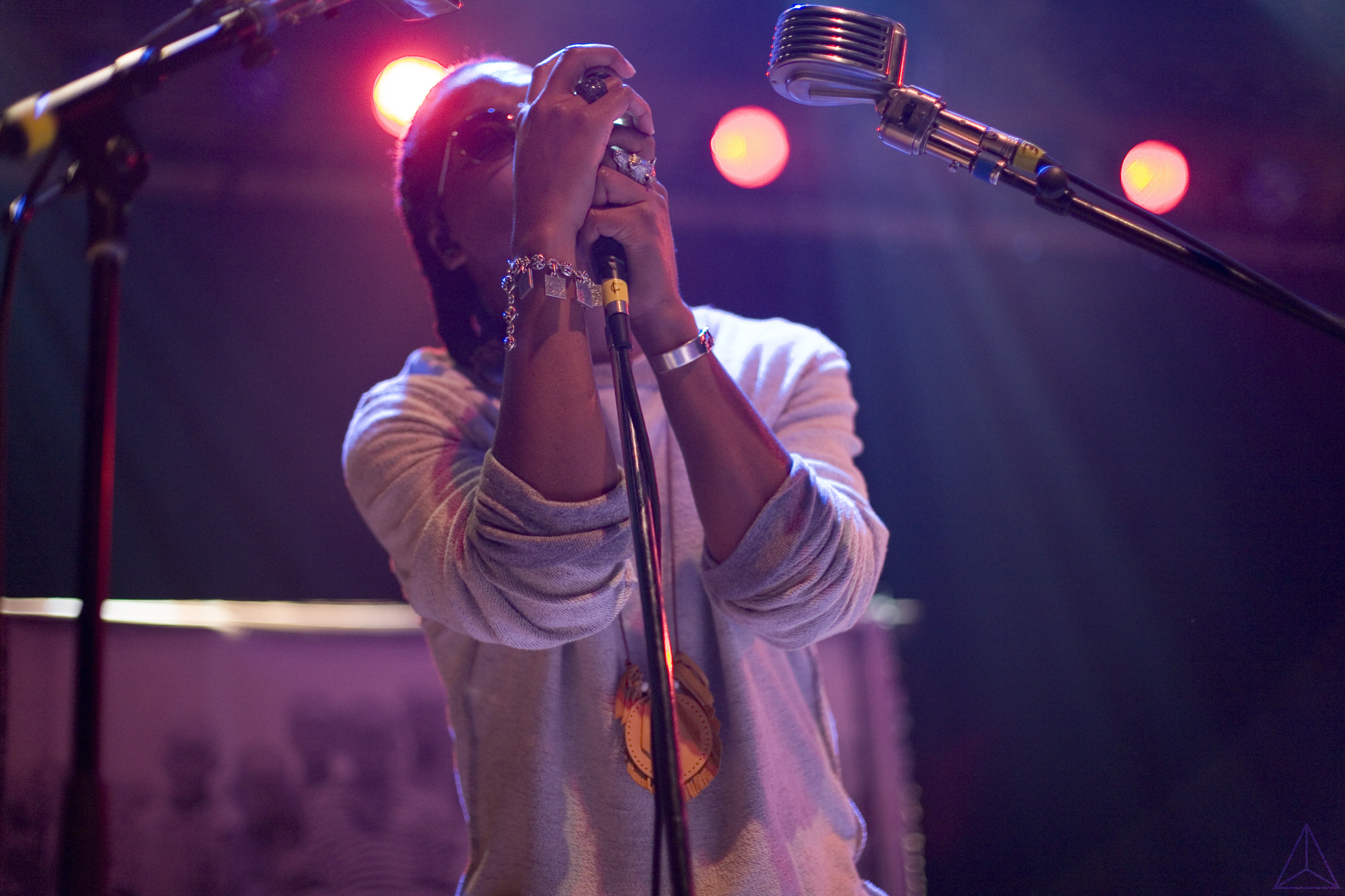 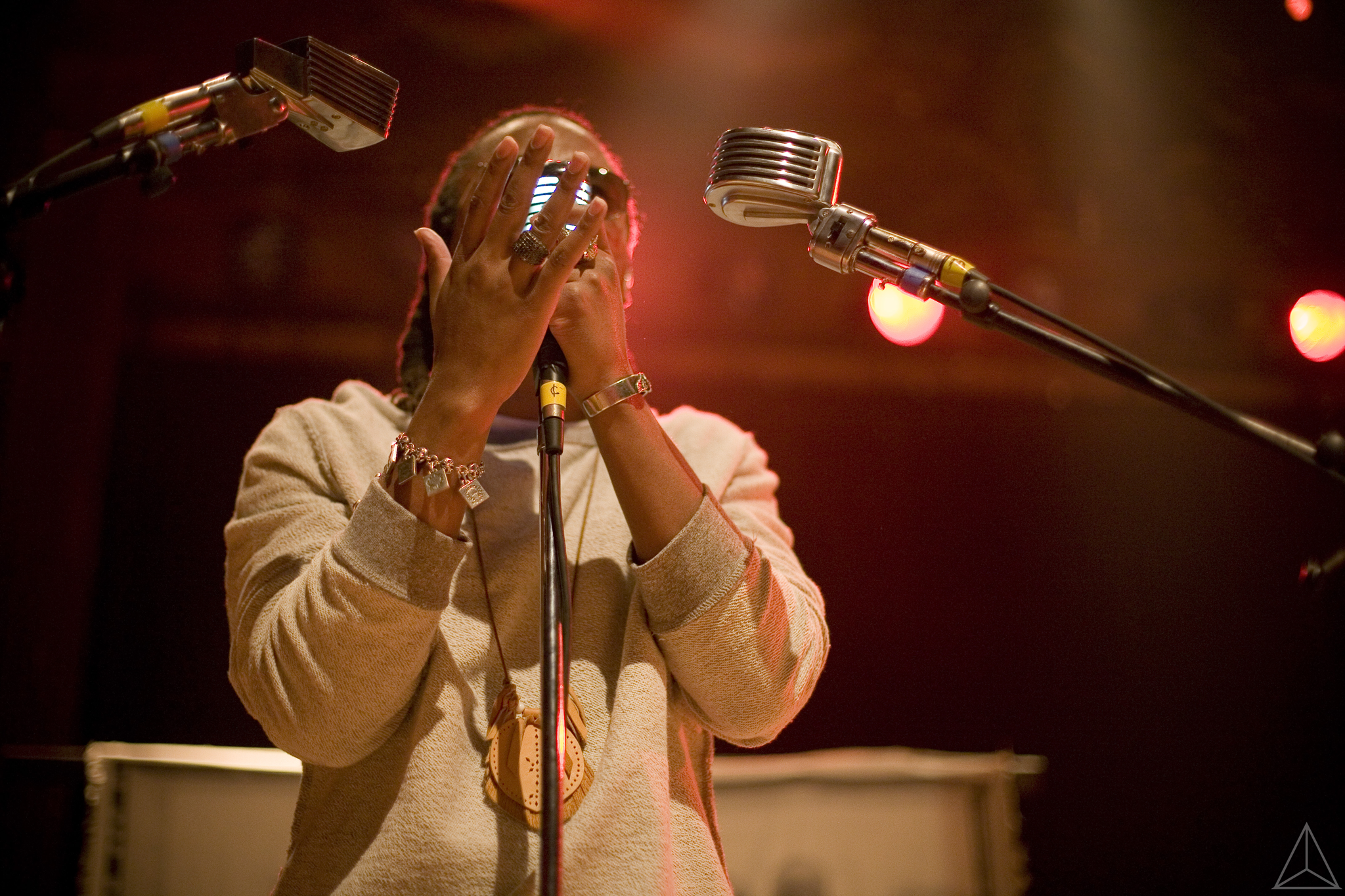 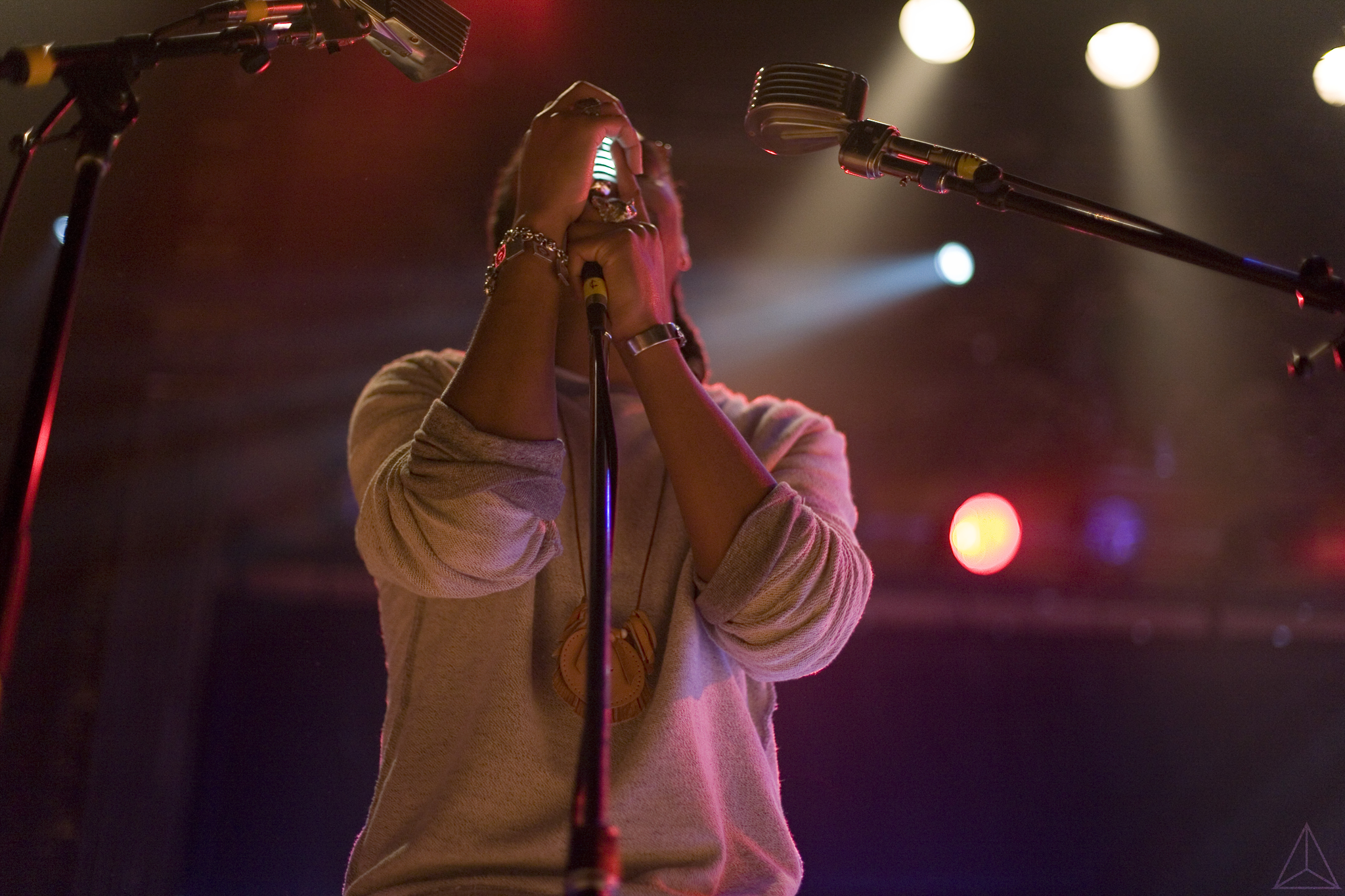 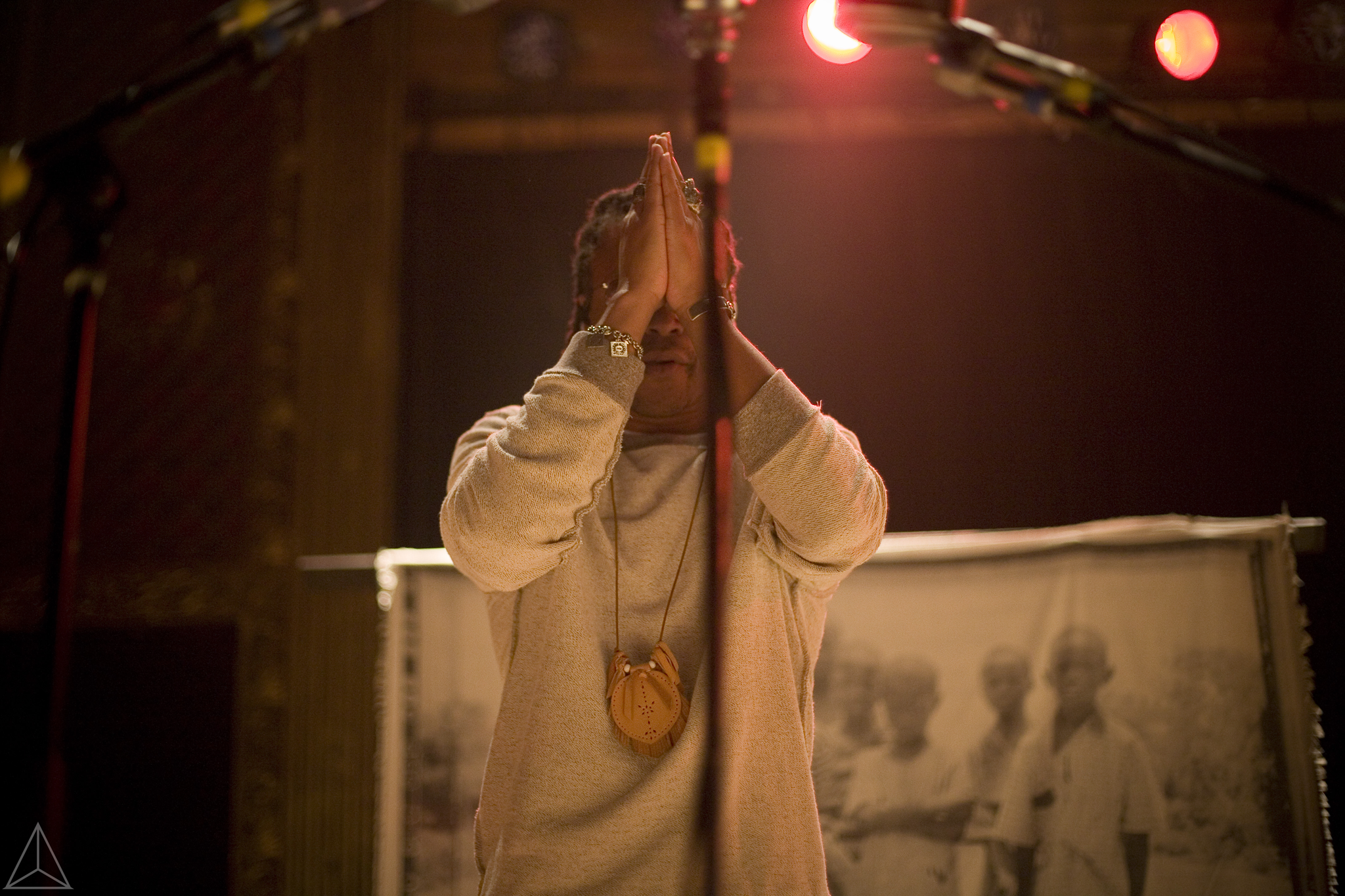 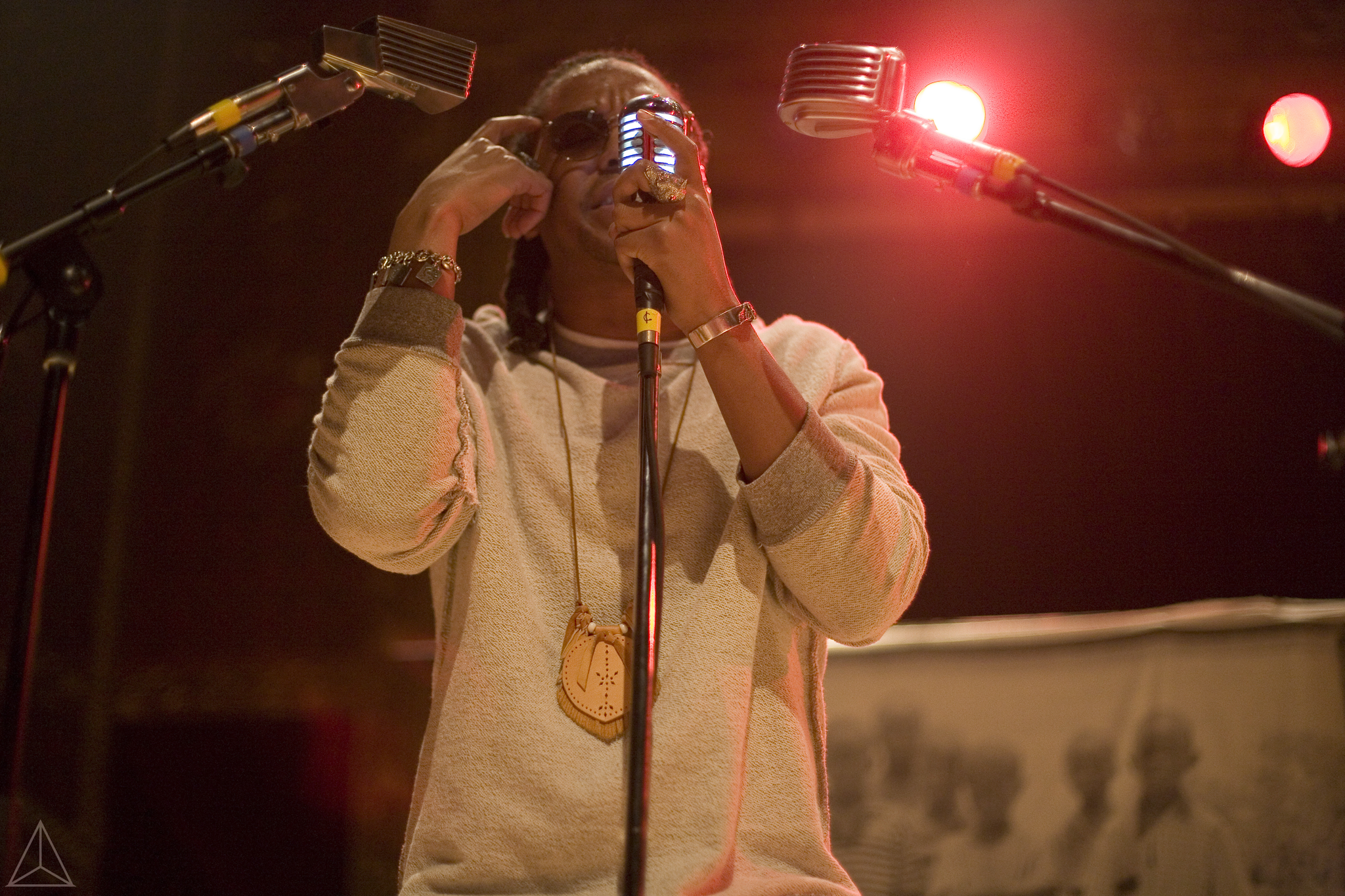 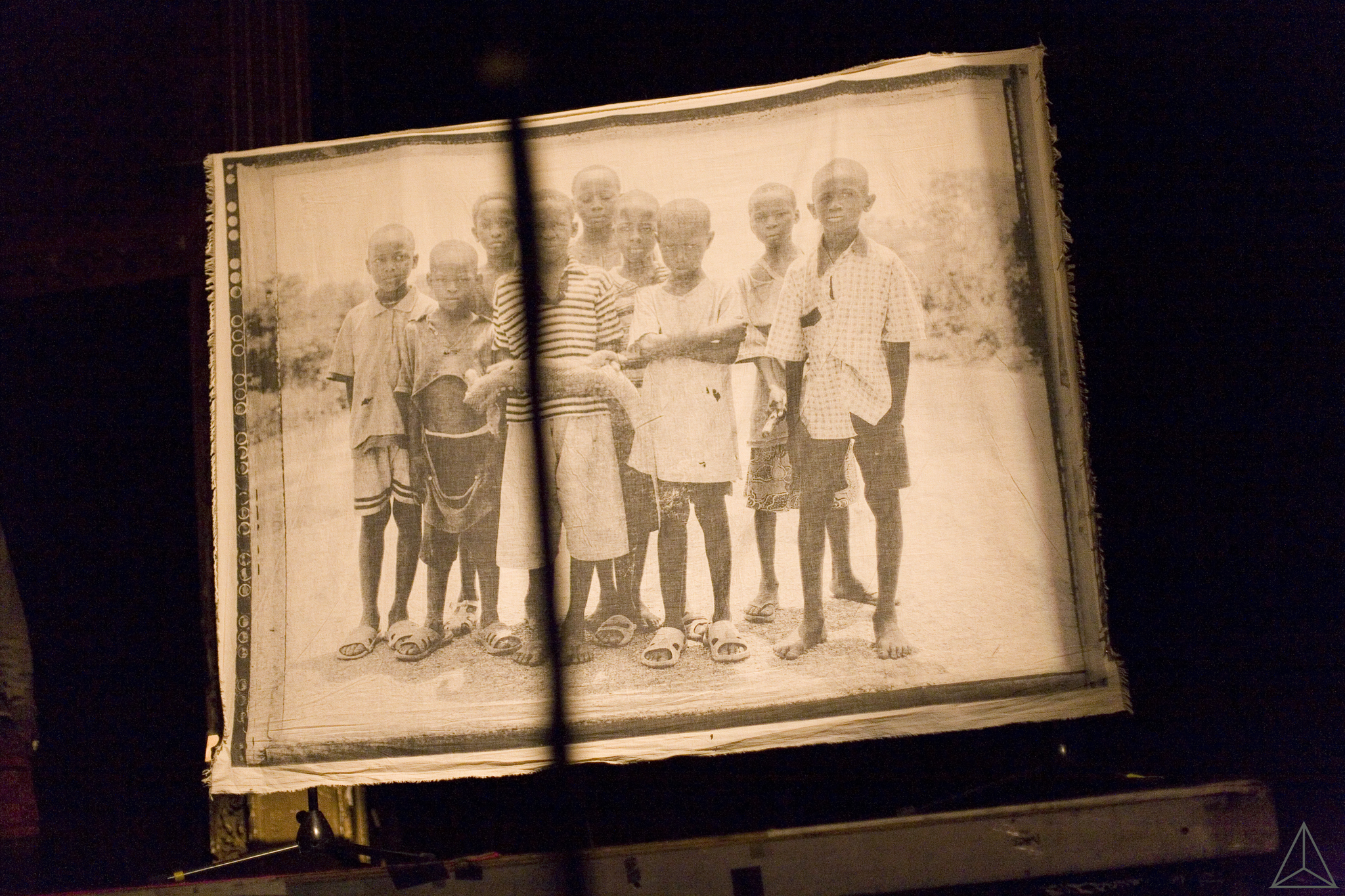 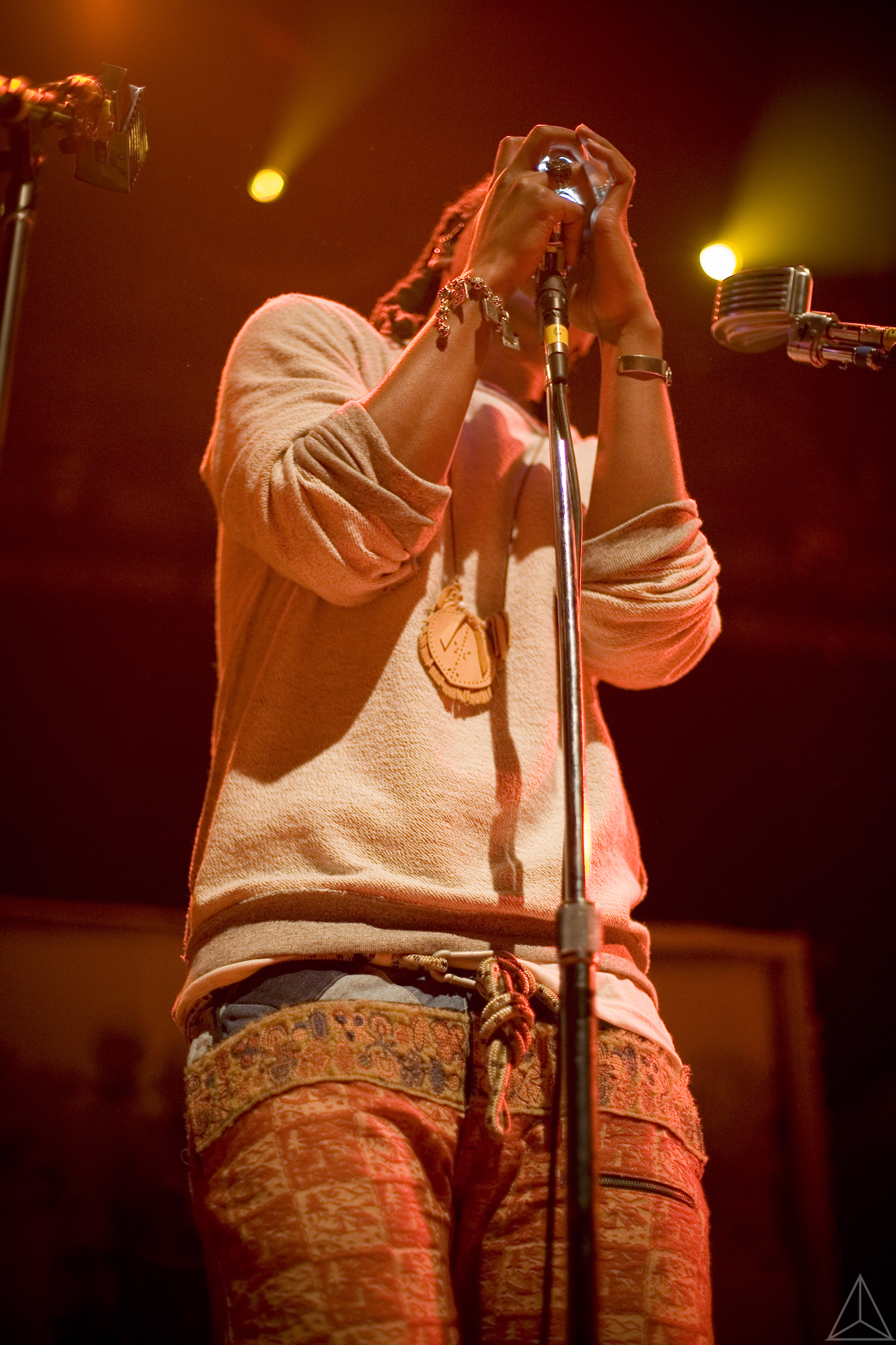 All Photos by DZ3 Creative @Dz3Creative