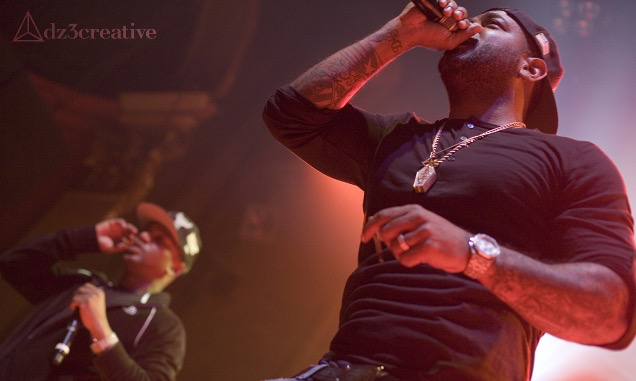 The minute this show was even mentioned, I knew I had to be there! The Diplomats- Cam’Ron, Jim Jones, Freeky Zekey and Juelz Santana, are like no other group in hip-hop and I’ve been a fan for years! I was beyond excited to catch the Dipset crew together in Denver at The Ogden Theater.

The show was off to a late start and it felt like we had been waiting for an hour just for The Diplomats DJ to take to the tables. Once he did, the energy built up fast and Dipset was on the stage in less than 10 minutes. The crowd went wild! Except, one this was missing- Juelz Santana! We sort of wondered if he would show up late or start a new set, but he never showed. That was a huge bummer! It isn’t quite Dipset without Juelz! Either way, the show got started and went on without him…

Cam’Ron, Jim Jones & Freeky Zekey started out their set with one of their newest songs “Have My Money” and quickly got into the classic songs we all were anxious to hear. The set continued with “Crunk Muzik,” “Certified Gangstas,” and “Summer In Miami.” For the most part, the 3 of them sounded great! Cam’Ron was especially raw on the mic as he isn’t very energetic on stage. Jimmy looked fit and seemed to be having a blast while Freeky was easily the most energetic on the stage. Moving along in the performance, we heard more dope songs including “Get ‘Em Girls” and “Down & Out”- which is a pretty classic Kanye West featured track- everyone was loving it!

They showed lots of love to crowd! Jim Jones asked the crowd “Who got that weed? I need to smoke something!” It took about 7 seconds for a concert goer to pass him a blunt which he happily hit a few times. Cam’Ron adding “Denver is LIT, man…” They seemed to be enjoying the show for sure. The set continued with Cam’s  “Suck It Or Not” track, the classic “Oh Boy,” and of course “Hey Ma.” I was personally waiting for “Hey Ma” just so I could sing along every word- which my homegirl and I gladly did! That was one of my favorite parts of the show!

Cam’Ron then took a minute to address the crowd of fans and thank them for coming and supporting Dipset for all these years, he then left the stage. Jim Jones and Freeky then performed “Ballin'” and they thanked everyone after as well. That was thought to be the end of the show. We were a little disappointed and felt the show was just “stopped” and we hoped for an encore. Sure enough, all 3 guys came back to the stage after the DJ had the crowd chanting “DIPSET! DIPSET! DIPSET!” They performed the high energy track “Do Something” and the fans loved it! They were happy to get another one from them before the show was over!

Over all, I enjoyed the showed a lot! There are too many classic Dipset songs to not have a blast at the show! I absence of Juelz Santana put a damper on the show and that is the only thing that could have made it better! I’ll be sure to catch another show with them and pray that all 4 members are in the building for it!

Check out the photos from the show below…