Movie Review: Jimi: All Is By My Side

I’ll be the first to admit, I’m not familiar with the real story behind Jimi Hendrix.  I’ve always been intrigued by the mysterious figure, half legend, half folklore.  This is, after all, the guitarist who set his instrument ablaze at the 1967 Monterey International Pop Festival and also performed one of the most iconic versions of the Star Spangled Banner at Woodstock in 1969.  Although the new Jimi biopic, Jimi: All Is By My Side does not include the game changing aforementioned events, it does show Jimi’s meteoric rise to the top of the rock stratosphere.

The story begins with a young Jimi, played by André Benjamin, known to many as André 3000 or 3 Stacks, depending on who you ask.  But this review isn’t about André.  Or is it?  Honestly, I wouldn’t have been as quick to view and review this movie if it weren’t to also see how Dre holds up in the acting arena.  From what I consider to be another major role in a line of recent roles for one half of Outkast, Andre really embodies a very believable Jimi Hendrix.  His guitar playing and singing is not akin to a Milli Vanilli performance (shots fired), it really looks authentic.  Although I expected 3000 to bust out singing “Hey Ya!” at any given moment during the movie, by the end of it, I couldn’t separate André from Jimi.

Now back to the movie. I could bore you with a scene by scene synopsis of the flick, but I’ll leave it at this.  If you’re interested in seeing how Jimi came to be regarded as one of the most influential electric guitarist in rock music, this movie only tells a fraction of that, albeit a large fraction.  It does leave you wanting more of his story as it begins with his discovery as a guitarist in a backing band and ends right before his historic performance at Monterey, which would launch him further into fame and in turn create an American icon.

The majority of the movie takes place in England, where Hendrix started his career as he began to run in the same circles as guitarists Eric Clapton and Keith Richards, who both played a major role in the British Invasion of the American music scene during the mid-1960s.  Bands like The Rolling Stones and The Animals as well as other musicians from the United Kingdom were well versed in American Blues and Rhythm and Blues music and used it effectively and gained popularity with the American youth.  One of the more memorable scenes in the movie is when Jimi is taken to meet black rights activist, Michael X.  In that scene, Michael X has a conversation with Jimi that is all too relevant, especially in today’s Hip-Hop music and culture climate.

“I’m reading in the papers how they talk about your music, “Wild, and tribal, and violent.”

Michael continues, “But they don’t use those words when they’re talking about Jeff Beck or Eric Clapton.  No, when they play the blues, it’s acceptable.  When you play the blues, you’re a “violent, black, abomination.”

Michael X goes on further to implore Jimi to leave the entertainment aspect of music and instead, create protest music that serves his people.  To that notion Jimi replies, “My people?  They’re all my people.  Every last one of them, they’re my people.”  He concludes the conversation by saying, “You really want to change things?  When the power of love takes over the love of power, that’s when things will change.”  Spoken like a true visionary. 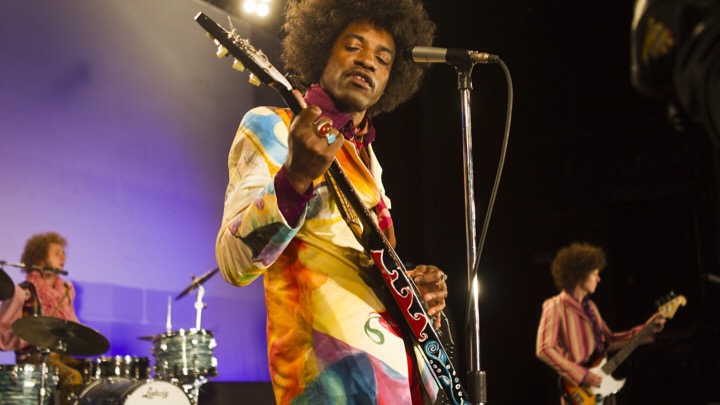