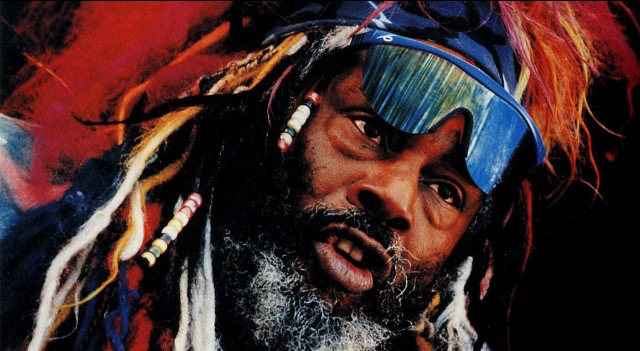 The Mothership Has Landed | A Concert Review of George Clinton and Parliament Funkadelic at The Ogden in Denver, CO

The Mothership has landed again and her timing is impeccable, as always. In an age where a good share of music is created digitally, it renews my faith in music to see George Clinton still killing the game with Parliament Funkadelic. Relying on live instrumentation and raw vocals, the Ogden Theatre was in for a show Sunday night.

After a scorching intro set, “welcome to the world of Funkadelic, ya’ll” announced the return of The Funk. “Good to Your Earhole” had several fans in the front row head-banging. It was intense. The electrifying pace continued with “Get Off Your Ass and Jam.” This classic began a medley that included “Up for the Downstroke,” during which George blazed one with CO.

A mean Garry Shider solo jam brought the tempo down and gave everyone a chance to inhale. Georges’s two grand daughters came out next to perform as Kandy Apple Redd, and delivered a stirring cover of Bootsy Collins’ “Vanish in Our Sleep.” In a surprise turn, Sir Nose D’Voidoffunk came out to introduce “Flashlight,” an obvious crowd favorite. Earth people of all ages swayed back and forth to the often sampled Funk staple. Sir Nose then proceeded to do some Cirque de Soleil moves, contorting his body like a pretzel, and going back and forth amongst the crowd to touch the hands of The Funk Faithful.

Ever the consummate MC, Clinton really Moved the Crowd, stepping in as a band director and leader, then stepping back to allow his musical cohorts to stimulate the people. Such is the case when he introduced his other granddaughter, Sativa. She proceeded to sing “some stank and I want some” before rattling off several bars of lyrical cannabis.

“Hard As Steel” continued the Jazz tinged set. Sativa went acapella at one point, allowing her words to reach the Earthlings populating Colfax. “(Not Just) Knee Deep” had the crowd in a trance, yelling “she’s the freak of the week!” Clinton and Sir Nose then sandwiched a female Funk fan and proceeded to… well, get freaky.

A call and response set had the crowd interaction in full effect. Then the horns came in, followed by a foot stomping “Bop Gun (Endangered Species).” As I listened to the music, I reflected on the messages found deep within the lyrics and the album artwork on those classic vinyl albums. The crowd collectively chanted “I got to get over the hump!” and they were all simultaneously losing their shit. It was a religious revival and people were catching the spirit. “Gainin’ on ya!”

“Undisco Kidd” slowed things down to a syrupy pace. At this point, I swear George looked up at me high on the balcony and instructed me to be “on the one.” Message received. During the next jam “Take Your Dead Ass Home!” I marveled at how many components actually made up the Mothership: one trumpeter, one saxophonist, four guitarists, one dude on the keys, and a drummer that changed throughout the night, of which I counted at least three.

“Give Up The Funk (Tear The Roof Off The Sucker)” brought everything together like Voltron and had the Mothership’s passengers singing “we’re gonna turn, this mother out!” G then gave the keys to the horn section so they could bring us home while the three beautiful vocalists completed the landing. Did I forget to mention the Funkateer playing the lead guitar behind his head and with his teeth? Goodnight Earth.