Troy Ave has officially been charged with attempted murder but when you hear about who was shot it will be a little confusing. Wednesday night before the T.I  concert at Irving Plaza, three gun shots rang through the backstage area resulting in a death and injury. When all of this information was pouring into the blogs Wednesday night the sources claimed Troy was shot and one person was dead.    As of now it is confirmed that Troy Ave was the shooter, and the person who was killed was Troy Ave bodyguard,Banga,born Ronald McPhatter. Why and how Troy Ave managed to shoot his own bodyguard is still a mystery.

Sources also claimed Maino was Troy Ave main target. Maino has released a statement about this horrific incident and denies having any bad blood towards Troy Ave and only wishes to spread peace withing the Brooklyn,New York Hip Hop scene.

“First and foremost my deepest condolences to the family & friends of Ronald Mcphatter who was tragically killed last night,” he says on Instagram in the caption for a picture of himself with Troy Ave. “Despite having to cope with more senseless violence. I woke up to the usual FALSE and ridiculous lies being circulated by irresponsible members of the media. What transpired was absolutely NOT the result of MYSELF or ANYBODY IN MY CAMP , ENTOURAGE, TRAVELING PARTY or ORGANIZATION IN ANY WAY SHAPE OR FORM. We entered the venue respectfully as always and exited in shocked like all other concertgoers. For the last 5 years Troy Ave, his team and I have had a great working relationship. Not only have we performed and done several songs together but we’ve had many personal conversations about life our goals and efforts as musicians. Despite media reports to the contrary, there are No “ongoing beefs” or “entourage issues.” It always has been and always will be good relations between myself AND MY TEAM and@TroyAve @Hovain @YoungLitoBsB and the BSB crew. Our deepest sympathies again to family of Ronald McPhatter and a speedy recovery to Troy Ave. The movement will not be stopped. #BROOKLYNUNITED#HEARDYOU”

T.I released a statement about the incident via social media which can be seen below and also the alleged video of Troy Ave shooting backstage.WARNING EXPLICIT CONTENT 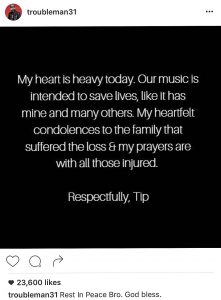