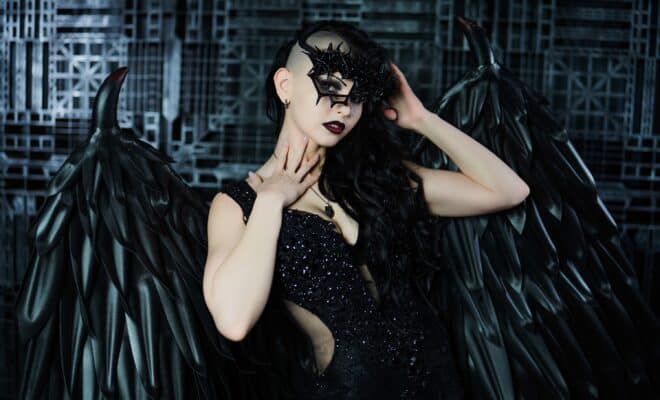 Bella Kelly Takes Us To The “Heartbreak Motel” In New Visual

There’s a famous quote that states: “Each man kills the thing he loves.” For the buzzworthy artist Bella Kelly, she shares how real that statement truly is with the release of the dark visual to her latest single “Heartbreak Motel.” Known as an artist who’s sound and creative to break the mold, plays a dark cupid with an assistant that infects lovers with so much resentment, it kills them along with their relationship. And with the song’s heartbreaking lyrics that reach the deepest, darkest corner of the soul, the universal language of raw emotions, pain and anguish, it touches even the coldest heart.

Available on lying Boy Entertainment, the new single really shows the artistic potential of this incredibly versatile artist. Bella is a chameleon who can change shape and form so easily and yet always stays true to herself. Her enchanting and haunting voice sits on an apparently simple texture of sounds, the perfect stage for this incredibly moving, intimate performance. Directed by Vicente Cordero and produced by David Gnozzi, the song and visual is a production of the highest level that pours out pure emotion. At the same time, Heartbreak Motel is high fashion, glamourous and classy.

“Heartbreak Motel” follows Kelly’s 2020 buzzer “Throat,” which accumulated over 700,000 views to date on YouTube. Both prepare for Kelly’s formal debut, which is expected in 2022. Before the project, Kelly plans to release more new music to close out 2021. Now is the perfect time for newfound fans to get familiar with a star destined to accomplish amazing feats.

While new to most, Kelly is far from it. She’s a poet whose words are disarmingly striking in their simplicity, very different than how the traditional “pop star” is represented in our time. To create some of the best alternative music of 2021, Kelly takes all her insecurities and fears and put them into powerful music. After “Heartbreak Motel,” for more on Bella Kelly, follow her on social media.

Take a look at the new video for “Heartbreak Motel” below.