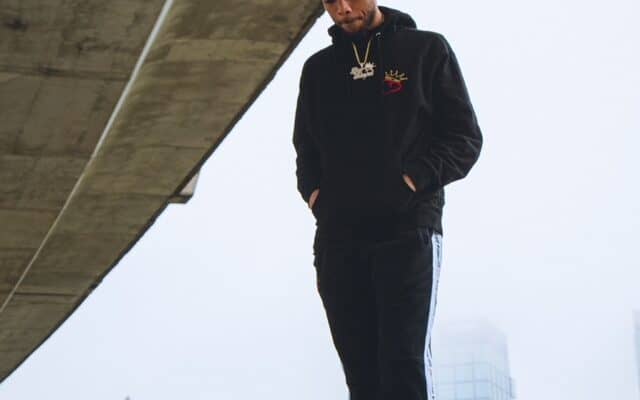 Riding a wave after years of grinding, Massachusetts rapper C. Wells is on the brink of explosion. Wells has developed an undeniable fanbase with a big-time collaboration and noteworthy project in Before the Tour Bus 2. Working on his next and highly-anticipated project, Wells speaks with us about his grind, surge in popularity and what’s next for his sound. Check out the complete interview below.

Where did the name C. Wells come from?

It’s funny how the name C Wells came about. I was in the streets early as a kid and very early on we chilled on Grove st. There was a bunch of us by the name of “Chris” so I came to the block one day and we all had nicknames and they were randomly calling me “C Wells” I didn’t know how it was spelled or where it came from I thought it was C Wills at first cause my names Chris Williams but the streets were correcting me on my own name like nah it’s C Wells that sounds better. I tried to run from it at first but eventually, it stuck now here we are.

How long have you been creating music?

So I was always in love with music since birth but I just never knew how to reach it. As I got older I want to say around 2002 God Son came out I heard “Made You Look” by Nas and I was highly inspired then I come across 50 Cent “Get Rich Or Die Tryin” and my decision was made mind you, I’m 9 years old. I meet Jo Jo, a staff at this after-school program I went to, called Gregg House. He created a project for us that we got to make a song to perform he seen how hard I was working on that verse and helped me take it to another level. Other than that there was really no studios around the city that I knew about so all it really was for me was writing from like 9 to 14 when I got to high school and a rapper I met there introduced me to a studio.

If you could describe your music in 2-3 words what would they be?

What was it like growing up in Lynn, Massachusetts? Was music something that was accepted as a career path?

Growing up in Lynn was definitely tough I grew up in a time rapping wasn’t really accepted, I could say there wasn’t really any direction yet as well. Not many people were making it out of Boston yet other than (guru, Benzino, etc.) but it had been a while. Let alone the small city called Lynn who hasn’t been given much to believe in besides sports and I could say I played a big role in that When I started rapping. My goal was to do things people around my way haven’t seen before knowing I was going to have to do 100 times the work due to the lack of resources we have here. Because the talents certainly here at least now .

Do you tend to freestyle or write?

I really go off my mood. I love free-styling but something I also figured out through college is I love writing as well. If I have a lot on my chest you just might catch me walking in the booth with nothing but a fronto rolled but if I feel like really articulating something perfectly I might sit and write for a few minutes and I’ll most likely know it by heart.

A mutual friend of ours actually made that song happen and I appreciate him still to this day for making that happen. Making the record was dope that was probably the first time I watched an artist not write a verse, just go in and it was actually fire. A lot of dope moments come from that song for sure. It had to happen I could honestly say that was one of those things my city hasn’t seen yet so We had to make to make that happen.

Your latest single “Goat” is gaining some mass attention across plenty of media outlets as your song continues to grow. How does it feel to begin to garner the attention that you are receiving?

It’s something I’ve certainly been waiting for looks like it’s on its way to being one of my biggest songs. I don’t feel like I rapped on this it was more like a painting that should be displayed in a gallery to me.

What are 3-5 studio essentials for C. Wells?

Fronto, Weed, and Water (if there’s food there fire).

What do you want others to take from your music? Is there a certain message you are looking to get across with your music?

The all-around message to get across to the world is there are people out there who do understand both sides of the fence whether it’s being from the streets or having your diploma and we don’t have many voices for that and I want to be that.

Where do you see yourself in 5 years?

The Live Famous Brand feeding my family for sure & reaping the benefits of all the hard work that’s been put in no matter how this goes.

What separates you from everyone else that is creating music these days?

Nobody my age right now is really rapping or even giving a good balance of everything. Where I come from is very diverse and I bring my city with me everywhere I go so adapting is never an issue neither is changing direction nor is reinventing not many artists have that.

What is it like to completely bet on yourself with this music path you are choosing to pursue? Talk to us about the highs and the lows of this all, the pressures?

I can’t even lie to you this road been tough but when it’s good it’s good. I’ve been betting on myself for so long though I’m numb to it the odds have been against me every time especially in sports with coaches playing favorites but right here I control the outcome. I can’t blame anybody for my losses and take all the credit for wins.

Although you might not be at your final destination and where you truly see yourself. Your work ethic is undeniable. Do you have any wisdom or advice to give to your pees or those that are looking to take the same route as you?

Don’t let anybody tell you anything. I went from the kid who got his first mixtape thrown out of people’s windows to inspiring others to rap you’ll enjoy the results later.

Do you want to sign somewhere eventually or do you see yourself taking the independent route for the long run?

If the opportunity is right sure I’ll sign. If I could also get to where I need to be independent I’ll take that as well. It’s all about sharing a vision with me either route I’ll make history where I’m from it just has to be done right and feel right to me there’s already enough bad business that goes on.

What is your favorite record that you have dropped to date? Not the fan-favorite, you’re favorite. And why?

I’d say it was a song I dropped on SoundCloud called “get the message?” a while back. It was a song that I felt didn’t get the listens it should’ve been like other songs I’ve released but it showed how talented I was early being able to tell a story backward. Growing up I always felt like being able to rap telling a story backward was fire like when Nas did it and I wouldn’t tell myself I was any good till I was able to achieve that and I did.