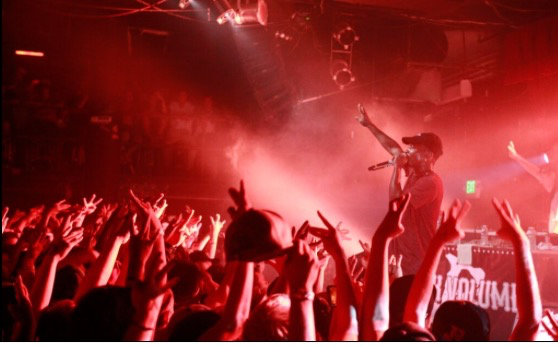 The Funk Volume Tour 2015 is in full effect and Denver learned that for not one but two shows! Dizzy Wright, along with DJ Hoppa, Hopsin and Jarren Benton are on a 50 city nationwide tour. Tours with that many dates are sure to be hard but man, these guys and the Funk Volume crew have what it takes, without a doubt!

Arriving to one of my favorite Denver venues, Cervantes Masterpiece Ballroom, FV fans were everywhere. Getting their tickets at Will Call, asking for extra tickets on the street and waiting in line to enter the venue. Two huge tour buses were parked right in the front of the venue which I think had some fans distracted. Jarren Benton was the first to perform and unfortunately, I only caught the last of his set. The crowd was thick though and Jarren was a great warm up for the fans!

DJ Hoppa came to the stage and demanded the crowd right away. “When I say FUNK, you say VOLUME,” he yelled! The energy was so high already, I knew this was going to be a great show. Hoppa started out spinning some tracks and keeping the crowd engaged. I noticed a drum kit setup on stage and I got even more excited. Hip-Hop is great live, but added live instruments makes the show even more spectacular!

Dizzy hits the stage and as expected, the crowd goes WILD! Denver certainly loves the Las Vegas emcee! As always, Cervantes’ lighting was on point, this night with red, yellow and green colored lights- adding to the smokers vibe. The sound was perfect, too. Dizzy knows he has fans in the building as he starts performing “Floyd ‘Money’ Mayweather.” There were hands up everywhere! I just stood there on the side of the stage nodding my head and smiling because I LOVE THIS SHIT. The drums did exactly what I knew they would- had the entire energy of the performance up 100 notches. The drum played had impeccable energy and rock star genius that it was epic just to watch.

Dizzy was moving through his set performing “City Love,” one of my favorite tracks by the artist. After that I noticed a commotion in the crowd, I assumed there was a fight. I wish people wouldn’t fight at concerts but of course that’s not something any can control. I moved to the side and looked at the crowd a little more to see what was happening. “Oh, wait,” I said to myself, I realized it wasn’t a fight at all! Dizzy had just jumped down into the packed crowd while performing! I laughed to myself and just smiled because the energy at this point was NUTS! Dizzy got back up on the stage and addressed the crowd saying “I Fuck with y’all Denver, Stay on ya feet!”

The show continued and Dizzy performed “New Generation,” “I Can Tell You Needed It,” “Can’t Trust ’em,” “SOLO DOLO,” and a crowd favorite “Hotel Strippers.” Dizzy fans were in the crowd spitting every word! The show was was so fun! Dizzy even did a full front flip into the crowd and pulled a “Method Man” and walked on the crowd while performing- and no, nobody got hurt. It was an excellent performance, you can see Dizzy gives his all for every show.

After Dizzy performed, Hopsin was up next. I didn’t stay too long for his set but the crowd was extremely amped to see him. I watched him perform “Rip Your Heart Out” and he was putting on! There is no doubt Hopsin and the rest of the FV roster knows how to put and a damn SHOW! Not only did Denver get this epic show once, but again the next night! Thank you Funk Volume and thank you Cervantes for hosting such a dope concert!

Check out upcoming Funk Volume shows HERE and check out the photos below!