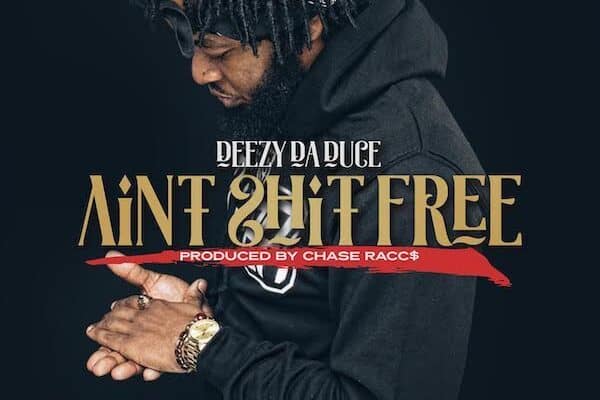 Today rising Texas rapper Deezy Da Duce releases his new single “Ain’t Shit Free.” The single, produced by Chase Racc$, will be featured on Deezy Da Duce’s upcoming project set for release this Fall and features among others the talents of Bun B.

“If you want to hear diversity in lyrical content, some storytelling, check me out. You want to hear some hard, straight forward raps from a Texas artist, raw and real, check me out,” Deezy Da Duce said proudly.   “I feel I have something musically for everyone. I talk about my life, my experiences, the good and bad of it all. I feel I’m relatable because I’m no different from the next person that’s out here striving to achieve a goal… it’s just I kick my sh*t over beats.”

Produced entirely by Chase Racc$, Deezy Da Duce has remained loyal to his hometown of Beaumont, Texas for this project Bitch, Stop Playin Wit Me, which is just a short distance outside of the bustling city of Houston, Texas.

“You want to hear something new, you want to be a part of the come-up of a new artist, check me out,” an excited Deezy Da Duce said to fans in a statement to the press.  “Hell, Bun B said it was refreshing to hear, and that I didn’t sound like everybody else. He said that I was “rappin rappin”, that sh*t GOTTA stand for something.”

After getting started his senior year in high school, Deezy Da Duce started in a duo. Seeing my group member’s set-up showed me making music wasn’t far-fetched and that it was possible to do on our own terms.

Deezy was right and he’s watched that passion and belief spread across his local music scene.

“The past 5 years show a lot of potential in the local music scene in Beaumont. It’s about a handful of artists and producers with great potential to take things to the next level. Including myself,” Deezy Da Duce said. “I just recently received a feature from Bun B of UGK, which was hella dope, and he shared hella game with me as well.  After speaking with him I’ve become motivated to start  prepping to shoot some visuals for some songs on the new project prior to its release.

Adding to the mix of his project Deezy Da Duce is also preparing to release some gear for his apparel line named Stay Player Apparel.