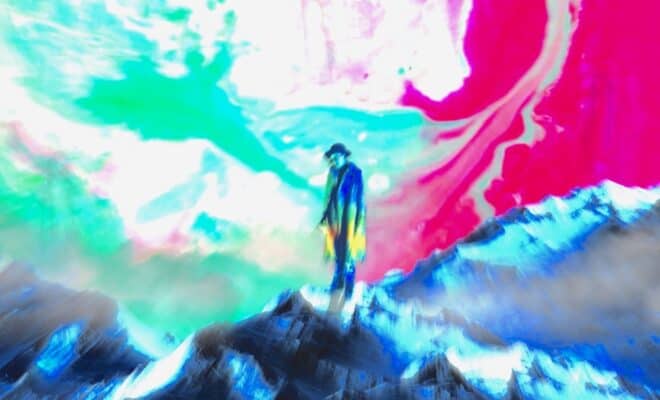 Recently Southern California rapper GhostLuveMe released his new project, Don’t Go Gently. The nine-song project released through High and Mighty Entertainment is highlighted by the catchy lead single, “Pill Crosby” which is accompanied by a hilarious visual. Also on the project is the single “Von Strangle” ft. $teve Cannon which has been generating significant attention on the DSPs over the last few weeks.

When asked about the project Ghostluvme explained that this project combines songs that are nearly three years old with newly recorded material that creates a uniform soundscape for listeners from beginning to end.

“Some of those songs are three years old, but the songs were deliberately selected to be together. You know, I make tons of songs, hundreds of songs, so you know, I just try to select the best ones so that it plays out, kind of like a whole movie. Whatever you want it to be like, it has a beginning, middle and end that flows together.” Ghostluvme said. “I believe in my music a lot, I’m underground and so the only competition right now is myself. Music really means the world to me. I mean, people probably would be surprised how much I care about this – I care too much. That’s basically why it even took me a long time to drop this shit because I cared so much about the whole project sounding good from start to finish.”

Influenced by Rock music and riding heavily on melodic hooks, the music of GhostLuvMe is light hearted but is also backed by GhostLuvMe’s classically trained ear that draws on influences ranging from Motown to Lil Uzi Vert.

Also buried deep inside of GhostLuvMe’s music is the tragedy that will forever impact his life after his family members were killed by a psychopathic man on the loose in what would later be determined to be a murder suicide. In fact, the incident is where GhostLuvMe draws his name.

“To me my name is just like a reminder to myself that love is something that can exist, even after somebody is gone. So it’s like, you know, Ghost Love Me, my family is always with me,” he said.

Putting tragedy aside and priding himself on making catchy songs, not worrying about the genre or what people will say, GhostLuvMe acknowledges that his music has both Trap and Pop elements to it, but, he maintains that his music has a bit of “griminess” that leans more towards the Rock side of music the spectrum

“My music is catchy, and Pop is catchy, but I would say it’s not as refined as Pop music tends to be. My music still has that like Trap element to where it’s not like super polished, you know? When you hear a lot of Pop music, it’s got that polishing that they do just like mixing and mastering and stuff that makes it sound really clean,” Ghostluvme said. “I would say I’m way more Rock based than Pop based, cause it’s like my shit is catchy, but it’s still grimy. I like Pop songs, I would love to be able to make Pop songs, I’d probably be further along in my career if I was making Pop songs. But you know, my basis for my music is Rock because I’m classically trained at the guitar.”

With Emo-Rap and Pop-Punk influenced Rap taking off during the late 2010’s with artists like Lil Peep, Juice WRLD, Trippie Redd and others, there’s no question that Ghostluvme has a lane with loyal fans that will continue to support his movement, backing the message in his music.

“A lot of the Pop-Punk type influenced stuff I’ve heard today is a little bit more on the emo sad side of things. I feel like my stuff is kind of melancholy, which is like both happy and sad at the same time. It’s kind of like there’s a funny line, then there’s a sad line. Its happy and it’s sad,” Ghostluvme explained. “I feel like society naturally fits as melancholy. It’s like at any given moment, if you’re not happy, you’re probably sad or maybe even happy at the same time. You’re just like sitting in the middle of it, you know, it’s like a yin yang balance and that’s why I like this kind of music so much. I think that’s why if you go back and listen to some of those pop punk bands just were so genius with some of their songs – they just said so much.”