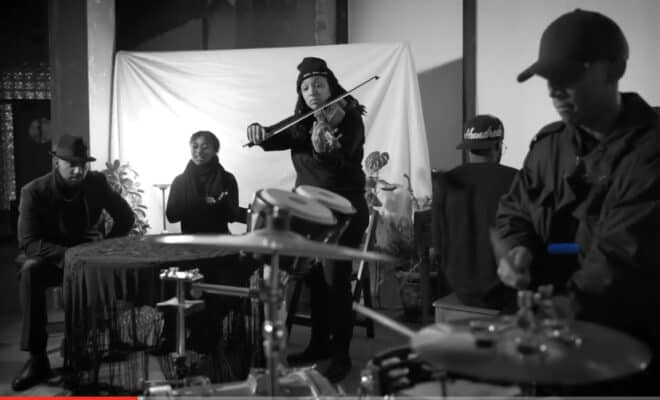 If you aren’t familiar with the incredible history of the Five Points neighborhood in Denver, CO then you really need to do some homework. During the early 1920’s and into the 1950’s, Five Points became a hub for Jazz. Lounges lined up and down Welton St. and catered to the talents of Billie Holiday, Miles Davis, Nat King Cole, Duke Ellington, Count Basie and so many more. In fact, The Rossonian Hotel and it’s lounge acquired a reputation as the best jazz club between the Midwest and the West Coast.

Fast forward to 2021, and this same hotel has now provided incredible black and white visuals for a 3 song performance featuring Ramond, A Meazy, Kid Astronaut, J Loryn, Champ and Sydnie Battie. The three song performance features the most popular tracks from the Black Sands soundtrack. Every single artist on this lineup is so talented so it’s no wonder that it was Ramond who was hand selected to to executive-produce the soundtrack!

Staying true to his community and his culture is what drives the art Ramond creates. “The opportunity with Unwrapt Music to film these specific visuals, that mean so much to me on a personal level, within the walls of such a powerful and important venue and in the same place where some of the all-time greats performed is the honor of all honors” Ramond said. The visuals were produced by Unwrapt Music, a local live music series based in Colorado.

Check out the amazing video and music below!