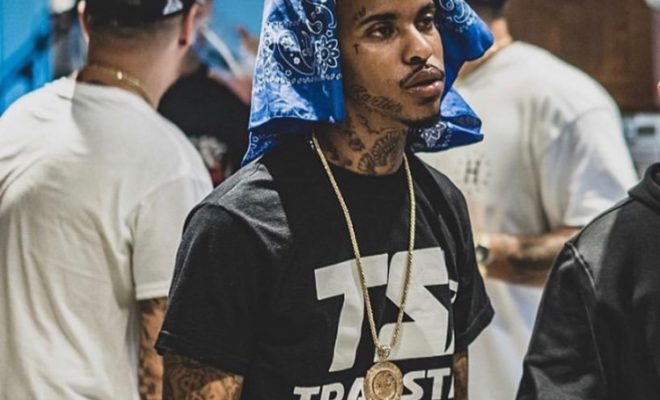 Bred in the San Pedro area adjacent to Long Beach, MEXCCO got his start in music when he decided to leave the streets alone and take his music more seriously. Having grown up in a neighborhood where the Crips are the predominant gang, MEXCCO was seeking a new path, after several of his friends ended up dead or in jail.  Well aware of the dangers in the streets having narrowly escaped several risky situations in his youth, MEXCCO decided to turn things around.

“Don’t come to LA if you ain’t prepared, it’s a crazy experience if you ain’t from out here. It’s our own little culture, but it’s all we knew and now with this music it’s a better way of life and we can expand our horizons. That’s the example I want show people and why my music so important. It goes way further than the trap and what all these rappers try to impersonate with all this music industry sh*t,” MEXCCO said.

Encouraged to rap by his friend and fellow Crip rapper AD, MEXCCO got his first hit song, “Gang Ties” ft Ashton Mathews,which made its way to Adam 22’s NoJumper channel on Youtube along with a host of other sites. MEXCCO also has songs with Mozzy, Shoreline Mafia, Mac P Dawg, AD, Squid Nice and more.

“Once Gang Ties with Ashton Matthews made it on No Jumper with Adam22 I knew I had to start taking this music more seriously. Then after that I dropped a song called TrapStar with Cypress Moreno and I’ve been making music ever since,” MEXCCO said. “My guy Phat Stax is from my main city and my hood and he is fighting some cases in the Feds right now. After he stopped I had to do it and pick up where he left off.”

Keeping the momentum going and continuing to develop his core fan base on the West-Coast, MEXCCO recently took the stage as part of a Red Bull’s Tapped In concert series.

“I just had a show at the Mayan with Red Bull and Cypress Moreno.  I did a couple of songs that I have with him – it was just a fun experience and we drank lots of Red Bull and did our thing. I’m focused on doing more shows and getting a plaque. Of course I’d love to get a Grammy, but I just want to keep making music and keep making my fans happy.”

Aligned with Foundation 360 Management and managed personally by Jamie Forster, MEXCCO has been able to push his brand to the next level.

“My management team has helped me with studio time and different outlets and a whole bunch of other stuff.” MEXCCO explained. “TrapStar is my clothing I’m trying to support it has much as I can. It has its own meaning. It’s not just about selling drugs, it’s about selling a profit and it’s about doing what you do and it doesn’t have to be something illegal. I want everyone to wear it.”