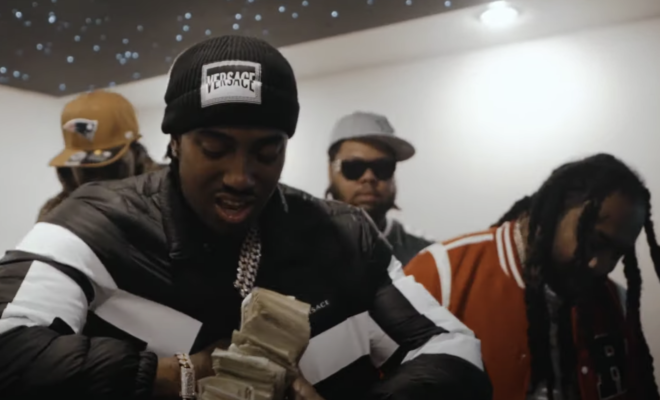 Icewear Vezzo starts off the song delivering a virtual blicky in the face of haters as they stroll in the club. Also featured on the song is KrispyLife Kidd and Louie Ray who deliver menacing verses as they rap over a Detroit heavy beat that is all gas and no brakes like the Pistons.

“I got a relationship with a couple of Detroit artists. Everything really was genuine. So they pulled up to the city already. And then we just put that together right there. I met with a lot of artists out of Detroit. So I’m actually putting together a whole Detroit Roadrunner compilation tape right now. Like there’s Vezzo, Babyface Ray, G.T. a couple more people too,” Roadrun CMoe said of his upcoming compilation.

When asked about the Dallas rap scene and how things have been shaping up for rappers on the scene, Roadrun CMoe said that the city had some momentum but its been tough to tell lately.

“I feel like at one point in time, not too long ago, maybe like 5-6 months ago, I felt like we were really making progress in Dallas, we’re really putting some eyes on the city, where now it’s been kind of hard to tell how it’s really moving,” Roadrun CMoe said. “My sound is different. You know, I got more of a trap sound but I call it anti-cap music, you know what I’m saying? You know like, I just… My music is just more like facts, it’s hard to kind of tell, but when you listen to it, everybody kind of talks about the same stuff. So my sound just helps separate myself already. But you know, if you actually tune in to like my lifestyle and stuff and really see what’s going on, it’ll make more sense.”

Branding his music as “Anti-Cap” music, Roadrun CMoe is 100% authentic with the music he is putting out.

“I want the fans to know that this shit is really going on, its “Anti-Cap” music. I got a well known clothing brand and I got a cannabis brand,” Roadrun CMoe said.   “Everybody stay tuned in, if you’re taking the time to listen to this interview, go look up my YouTube channel. It’s Roadrun CMoe I got a lot of fire visuals, you know. Like a lot of entertaining visuals. And my Instagram is Roadrun_CMoe. When you tap in, you’ll find I’m really active. I’m always moving around tapping in with different people and stuff. Yeah, check out the new music, it’s fire.”