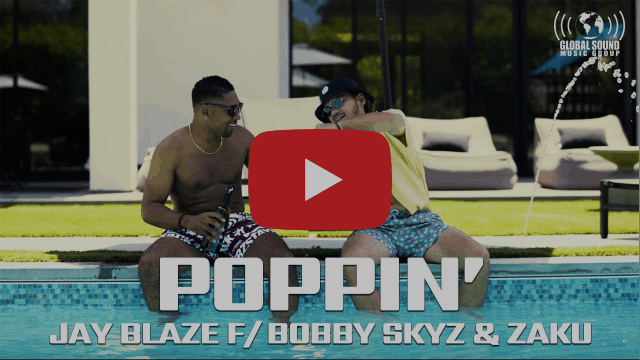 For CEO and artist, Jay Blaze, Global Sound Music is not simply the name of his record label. The company’s ‘We’re global. They’re local” mantra is a statement of fact.

Case in point is his latest single, “Poppin” Ft. Bobby Skyz & Zaku which features the combined crooning talents of Nigerian-born Bobby Skyz and Filipino American Zaku, labelmate to Jay Blaze. A pandemic-born song about finding your energy when the odds are against you, “Poppin” is finding favor in the DJ realm, including DJ Whoo Kid. The song is currently spinning on stations like NY’s Power 105.1 and Shade 45, as well as in markets like Chicago and Las Vegas. “Poppin” , which was produced by @sirrahmal, appears on Jay Blaze’s album, “Point of No Return.”

The visual for “Poppin” was released as part of Global Music Sound’s 30 for 30 campaign; in which they dropped 30 music videos in 30 days and is considered the standout of the series.

Like most of Jay Blaze and Zaku’s pre-pandemic visuals, Bobby Skyz’s verse on “Poppin” was shot in Southeast Asia – Manila to be exact. Jay Blaze and Zaku look forward to returning to the region to create again, once they can safely do so.